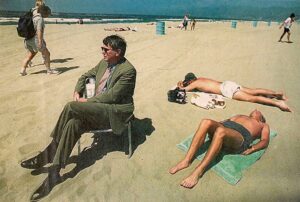 I often get asked how do you do research on Beaches?  Well, this image provides one version.  It is, of course, not really so.  I was asked by the LA Times to do an interview after I had given a lecture that was heard by an editor of the paper who then pushed to do a story.  I was asked to do the interview in the LA Times Santa Monica office and agreed because it was convenient.  I had an appointment at the British consulate on a visa issue, thus the suit–dressed to impress.  Once I appeared at the Times office the Times photographer really wanted to get me in a suit on the beach.  I went along with it thinking it would be a head shot and not much more.  But on seeing these two men on the beach he could not resist.  They were Swedes who were going home that day and wanted a tan.  Well the were hung over and they just laid there so they probably got on the plane with a bad sun burn.  Meanwhile there were other standard shots taken that I thought would be the photo to appear.  Well I was naive.  This was the one that appeared.  My friends were amused.

My research in actuality ranged from Seneca’s letters, to eighteenth and nineteenth century diaries and then in the modern era magazines, newspapers and scientific reports dealing with sea level rise.  Sad to report, none of this was done on the beach